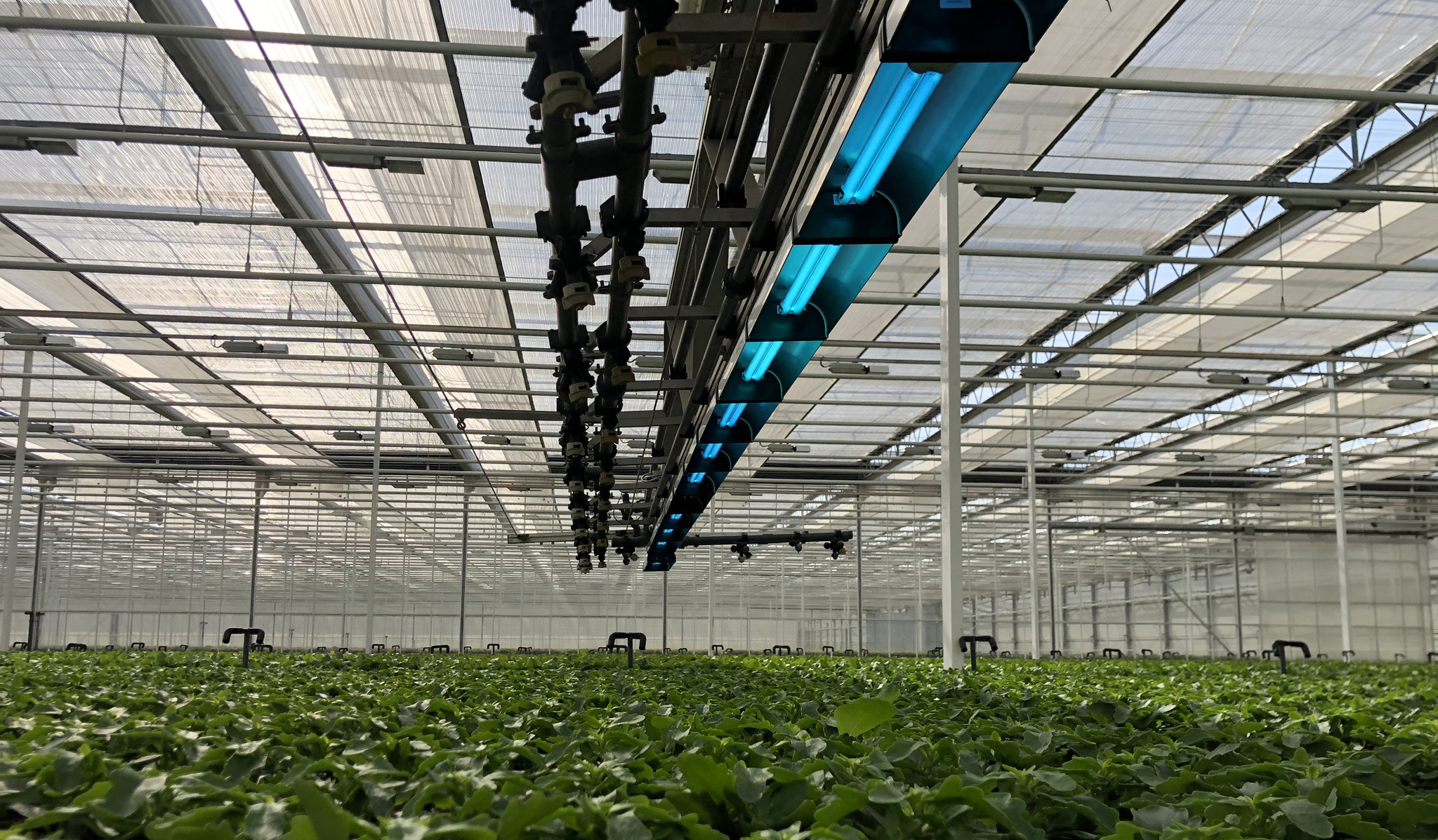 Protecting crops with UV-light instead of only using this light to grow isn’t unknown. UV light isn’t only used to disinfect (irrigation) water; it also protects plants against fungi and other culprits.

Bejo, located in Warmenhuizen (NL), supplies seeds for various open ground crops. Together with Arne Aiking, director of CleanLight in the Netherlands, and Wil Jorink, manager of Bejo’s organic vegetable seed production, we walk to the company’s organic greenhouse. The cultivation of young plants takes place in one of the first greenhouses we encounter. Wil: “It is not easy to grow plants organically. Young plants are easily susceptible to diseases and infections. Once they are in your crop, it is difficult to get them out without conventional means.” Team leader Hans van den Berg (organic department) joins the group; “We read in the trade magazines about the effects of CleanLight, and it triggered us. We made an appointment with a colleague in Aalsmeer to see how CleanLight exactly worked in his greenhouse.”

For those who don’t know: CleanLight is a UV crop protection technique that kills fungi, bacteria, and viruses on plants by applying a relatively low UV light dose. “In theory, it is assumed that you need about 250 millijoules to kill the plagues,” Arne says. “However, that is not entirely true. With that concentration, you get rid of your pests, including the entire plant—such shame. We have discovered that you can kill fungi with five millijoules if you illuminate at the right time. If you make sure that you control the fungus in the germination phase before the fungus penetrates the crop, a relatively low dose like that will suffice. That is why you have to repeat the treatment regularly.” 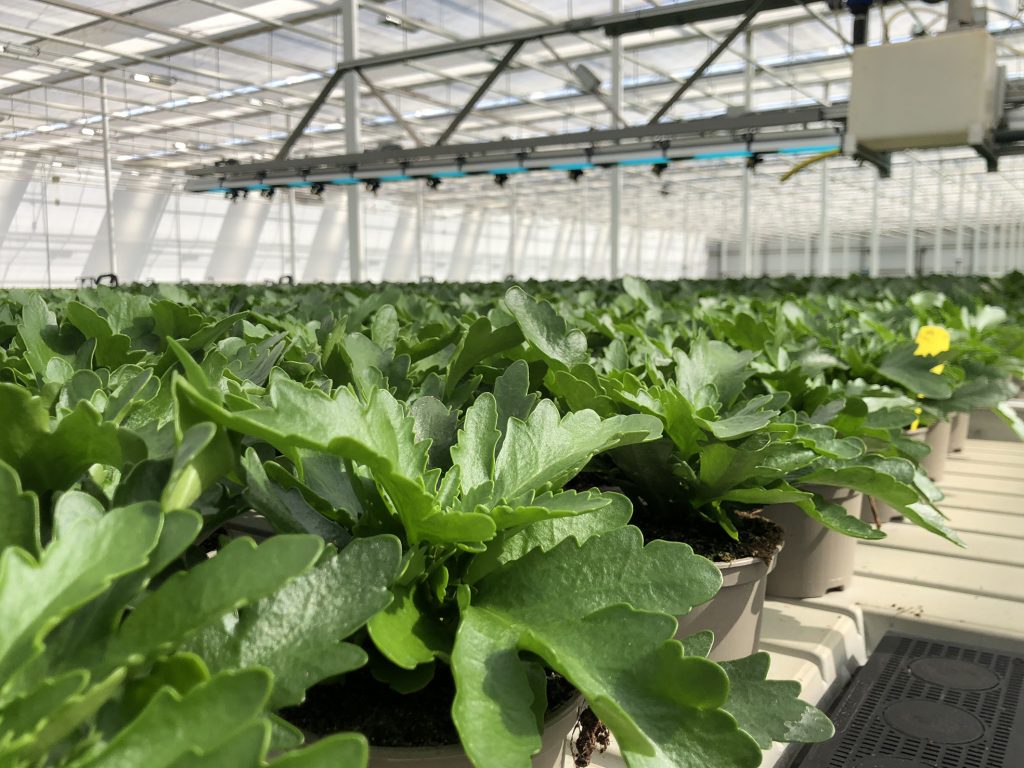 Here at Bejo it was relatively easy to apply CleanLight effectively. Wil: “As you can see, we mounted the CleanLight installation on the existing watering boom. The luminaires are quite compact and could therefore easily be attached to the bottom of the boom. “The test greenhouse contains crops that are up to five weeks old. “The standard dosage here is two seconds a day,” says Hans. “You can achieve that very easily by adjusting the speed of the watering boom accordingly. When you see that the crop needs a little more, you can adjust the watering boom so that it hangs above the crop for a little longer.” The interesting thing is that organic cultivation currently looks better at Bejo than the cultivation where crop protection agents are used. “I have to say that I’ve never had a problem with pests since we’ve been using CleanLight here,” Hans admits. “The crop looks very nice. Besides, the use of CleanLight has no negative effect on other biological control products when used simultaneously. Something that you cannot say about many regular crop protection products. And on the other hand, you can also use CleanLight in combination with plant protection products,” Arne explains. “You will then see that your protection products become more effective, and you, therefore, need to use less of them. Besides, other forms of technology also contribute to keeping your crop pest-free. Think of vertical fans, underfloor heating, a higher greenhouse, and so on.”

According to Arne, the success of CleanLight lies in a general UV deficiency next to fighting fungi, bacteria, and viruses. Arne: “Greenhouses are quite poor at transmitting UV light, while UV is an essential part of the spectrum. That wavelength is also healthy for your crop. You generally see an increase in the leaf mass when using CleanLight. It would be best if you treated regularly and preferably daily. That is also the way to control your pests. A fungus is a weak parasite that strikes when the condition of the plant is already weakening. If you keep your crop clean, the fungus won’t stand a chance.”,

At Bejo it is not that complicated to treat the crop daily. Still, there is also a solution for growers without a watering boom. Arne: “We also have Fixed Cleanlight, consisting of fixed air disinfection fixtures that can be attached to various greenhouse components. CleanLight can also be mounted on a trolley to go through the crops, or, when available, you can treat your crop with the Railspant from Klimrek. Some growers treat their products with CleanLight during the processing process. Everything is possible.” Yet, even with a watering boom, you need green thumbs to make the most of the effect of CleanLight. Hans: “You have to keep a close eye on your crop and learn to see the signals at an early stage. If you can do that, you will have a clean crop and, in our case, a higher leaf mass with a more compact shape.”

This article is a translation of a Dutch article published in GTT.