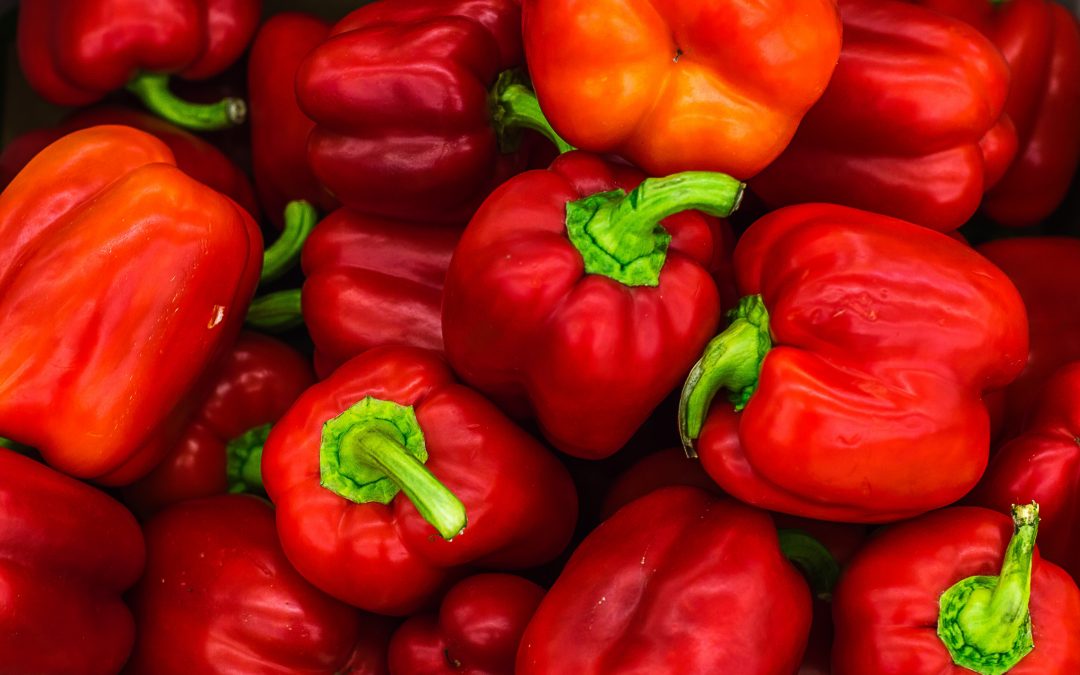 Consumers leave bell peppers with rotting stems lying around. This makes stem rot a cost item that everyone in the pepper chain would like to see reduced. At the Sorting and Packing department of ZON fruit & vegetables in Venlo, all bell pepper stems have recently been given a healthy dose of UV radiation. ZON expects this to minimize damage from stem rot.

It appears to be a relatively minor adjustment to the sixty-meter-long Aweta sorting street for sweet peppers at ZON in Venlo. The peppers still roll onto the conveyor belt in truckloads, sometimes twelve tons per hour. Still five or six people first pick the most obvious misses from the relentless stream of bell peppers – red this morning. What comes through that selection still moves automatically to the camera sorter, which sends each fruit via twelve lines to one of sixteen sorts. But since this spring, there is a new element between the human and camera sorters. The peppers roll off the conveyor belt on an ingenious roller track system under heavy black rubber flaps of a large red roof. It isn’t easy to see from the outside what exactly happens during those few seconds under the hoistable bridge. Only a bluish tanning bed is visible below.

“There are 24 special UV lamps there that illuminate the stems of all peppers,” explains Marcel Hoekstra, technical manager at CleanLight in Wageningen. The UV radiation from those lamps has recently been used to combat the Erwinia bacteria that sometimes reside on the stems of the peppers. CleanLight developed this method of post-harvest disinfection with UV and supplied unique lamps. Machine builders Aweta and De Vette integrated the installation into the sorting line. Hoekstra: “The particular roller track is to ensure that the stems on all fruits pass under the lamps long enough with the cut surface pointing upwards. “The sealing on all sides is to ensure that the people working next to the installation are not exposed be exposed to UV light.

The design and realization of this UV installation in the bell pepper sorting line is a unique project for the people of CleanLight in both approach and scale. Since 2005, the company has gained the necessary experience using UV lamps for crop protection in greenhouse horticulture. The UV disinfection technique has never been used before for the large-scale application in the post-harvest for sweet peppers. “The Erwinia bacteria cause most cases of stem rot in peppers,” explains Hoekstra of CleanLight. “Our UV system can effectively kill germs of this bacterium. We don’t have to wet the peppers or expose them to chemical agents. The challenges in this project were finding the right dose to stop Erwinia at the most practical run-through. In addition, the light must fall sufficiently on the cut surfaces of the stems because it is precisely on the cut surfaces that the Erwinia develops.” Hence the rotating rollers in that part of the sorting line.

Another hurdle that had to be overcome with this specific installation was guaranteeing food safety. “If you consider hanging UV lamps above one of the largest bell pepper sorters in Europe, you must, of course, ensure that under no circumstances, for example, glass shards can end up in or between the product,” explains Ries Neuteboom, sales manager at CleanLight. A Teflon screen between the lamps and the peppers turned out to be the solution. “That causes some light loss, but we were able to take that into account with the strength of the lamps,” says Hoekstra.

Silvio Gielen is team leader at ZON Sorteren en Verpakt’s bell pepper sorting line. He has every confidence in the new system. “The system has been running virtually trouble-free since its inception, and based on the theory and previous experiences of the supplier, I have no doubts about its functioning in other applications. “Although all peppers have been treated with the installation since commissioning, the precise effect must appear in practice. “Fortunately, we have hardly had any batches with stem rot this year,” says Gielen. According to the team leader, sampling earlier this spring yielded insufficiently useful results. “But the Erwinia pressure is expected to increase somewhat shortly, so we assume that we will soon see the differences.” Gielen emphasizes that the approach by his department is part of the total approach to stem rot in peppers, which starts with strict industrial hygiene at each pepper nursery. “We are tackling the problem further with the UV system in the central sorting.”

For ZON, this approach required an investment of between € 40,000 and € 50,000 to purchase the installation. Maintenance costs should be limited to the periodic measurement of the effectiveness of the lamps (the active part of the spectrum cannot be seen with the naked eye and must therefore be measured with special equipment) and the average replacement of the lamps once a year. An installation of this size is probably profitable for the very largest of the fruit vegetable sorters. Nevertheless, sales manager Neuteboom calls the installation in Venlo an important example of the versatility of the CleanLight technology of UV Crop Protection. In his view, successful post-harvest application of peppers adds a new aspect to the many areas in arable farming, greenhouse horticulture, open field horticulture, greenkeeping and hobby horticulture. UV crop protection has been successfully used here for some time.

Incidentally, even with this fast and clean disinfection technique, magic remains impossible. Hoekstra: “Unfortunately, bell pepper stems that have already rotted a bit do not suddenly emerge from under the lamps in good order. But our system does ensure that no new Erwinia can develop.”

This article is a translation of a Dutch article published in GGT Magazine.